We are just starting to use the OrCAD tools to design PCBs. I ran into problems after I completed the surface mount pad stacks and tried to change the directory so I could change padstacks to through hole connectors. I received cryptic error messages from the netlist import that I am unable to resolve.  How can I organize my library files to correct and avoid this type of issue?

The symbols included with the PCB Editor installation are often used as a starting point during development of a board design. PCB Editor points to these symbols and padstacks paths by default. As you refine development of your board and update and modify parts, you need to verify your project is reading part information from the correct path. Information presented in the remaining part of this solution article describes how you can verify library paths.

The PCB Editor variables that point to the location of the symbols and padstacks are PSMPATH and PADPATH respectively. 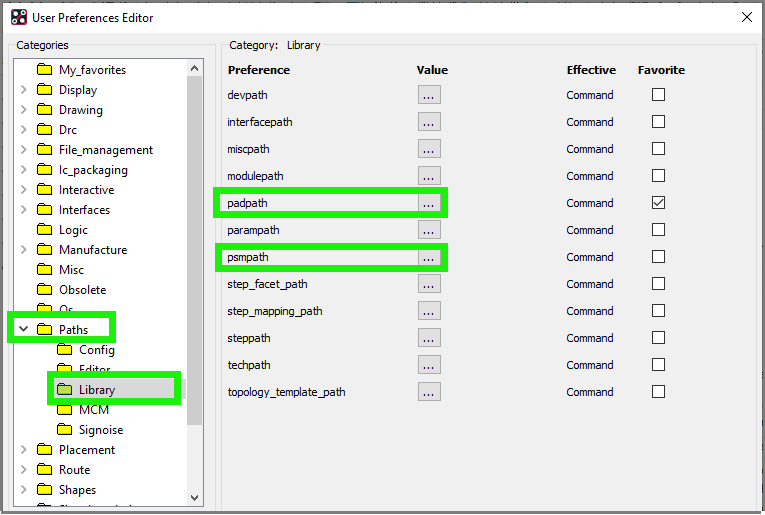 You can verify the paths of these variables by selecting the PCB menu, Setup > User Preferences. Your selection opens the User Preferences Editor. Click Paths > Library in the Categories column to expand the library display.

The values associated to the padpath and psmpath variables include lists of directory paths where you have saved your footprints and padstacks. When PCB Editor searches for a part, the search is conducted in the search order of the directory list. If there are multiple instances of a footprint or padstack, the search stops after finding the first match. If the first match is incorrect, board errors result.

To avoid this type of error, the best practice recommendation is to create padstacks and footprint symbols in a separate company directory. This helps separate your company symbols from the installation. It is a matter of personal preference but some users like to keep their padstacks in a directory that is separate from their symbols while others put them together in a single directory. However, there is no performance difference between the two methods.

An example of the path search order of the PSMPATH variable value follows. 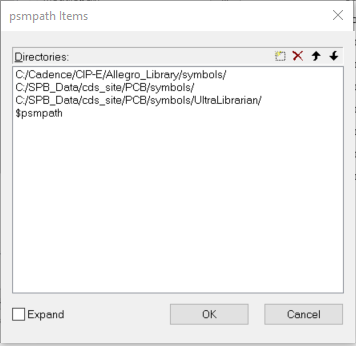 Similar to symbol paths configured for PCB Editor, it is best to keep your company libraries separate from the installation directory. There are several different ways you can configure part library paths of your Capture design or project.

You can select the Capture, Place > Part menu to open the Place Part window panel. This window includes controls you can select to search for parts and then selectively add a new library to your design or project.

You can also add a library to your design or project from your project manager/File Hierarchy Library folder. Highlight your Library folder and select Add File from the right mouse popup menu. Your selection opens the “Add File to Project Folder – Library” dialog where you can browse to select the library you want to add.

If you are using Capture CIS, it may be necessary for you to edit the Library section of your capture.ini file.

Advantages of adding parts from the Place Part window:

Disadvantages of adding parts from the Place Part window:

Advantages of configuring a library part from the File Hierarchy Library folder:

Disadvantages of configuring a part library from the File Hierarchy Library folder:

Configuring a library for Capture CIS by adding a path to [Part Selector Configured Libraries] of the Capture.ini file

Advantages of adding a library to the [Part Selector Configured Libraries] section of the Capture.ini file:

Disadvantages of editing the Capture.ini file:

You need to add a section to your capture.ini file to specify where the footprints are stored. Each path that contains footprint symbols needs a separate line. (unlike the PSMPATH variable in the PCB Editor)

Edit your Capture.ini file to add footprint information that may be similar to the lines that follow.